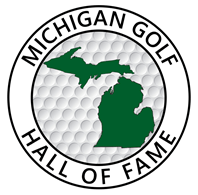 In addition, the MGHOF presented just its fourth Special Award in history to the Golf Association of Michigan (GAM), which in 2019 is celebrating its centennial year of service to the game.

The festivities were presented following a ribbon cutting at the new home of the Hall of Fame, which is now housed in the Ken Janke Sr. Golf Learning Center at Ferris State University's Katke Golf Club.

Beurmann, Friedrich and David Graham, the retiring executive director of the GAM, took part in the induction program. Mengert was unable to attend due to a recent health issue, and Bayer was inducted posthumously.

He called induction day his best day in golf ever and said when first notified of his election by nominating member Randy Erksine he researched the golf greats in the Hall of Fame.

"I couldn't believe, I still can't believe I belong with those people, those names," he said. "I had my family here on the 18th green today, and that meant so much to me, and I've been so fortunate to work at a job I love at a great club with great members. And then this happens."

Friedrich, 66, has worked for Boyne Resorts for 44 years and currently oversees a staff of over 200 employees in agronomy, course and golf shop operations for 13 golf courses, including 10 at three resorts in Michigan and courses at resorts in Maine and Montana. He is a two-time Michigan PGA Golf Professional of the Year (1998, 2001).

Friedrich said when he got the notification call from nominating member Larry Mancour, he thought his long-time friend was kidding.

Bayer, who died in 2003 in California at the age of 77, was once one of golf's longest drivers and won four times on the PGA Tour between 1957 and 1960. He was the head golf professional at Detroit Golf Club for 12 years (1972-1983). Prior to becoming a golf professional at age 29, the 6-foot-5, 230-pound Bayer was an All-American college football tackle and end for the University of Washington and was drafted and played briefly in the NFL.

Mengert, 89 and a resident of Carefree, Ariz., was a club professional who also played on the PGA Tour. He suffered a recent fall and doctors did not want him to travel to the ceremony.